Stephan Michaels:  Hi Governor Gregoire. It’s a privilege to speak with you.

Stephan:  I’ll make this as succinct as possible. A little background. In February of 2011, SSA Marine, which is 49% owned by Goldman Sachs, applied to the state and the county of Whatcom for a permit to build a port, an export terminal. It would become the largest export terminal in the entire United States. At about the same time, they announced they had a contract with Peabody Coal to export 24 million tons of coal per year to Asia. As you know, this has become a huge controversy for the city of Bellingham. But not just in Bellingham, all along the rail corridor. People are concerned about the rail traffic, the coal dust and the effects on the environment. And also, in Bellingham, they’re very concerned about the impact this will have on the development of their waterfront. Briefly, I know that you supported this project initially. You have since taken a step back and said it can’t be reduced to a simple argument of, you know, jobs versus the environment. Given the outcry over this project, I’m wondering where you stand now and how you see your role for the remainder of your tenure as Governor.

Gov. Gregoire:  So, I never took a position on the facility at all. What was being asked is whether we would serve as co-lead as we went through the environmental review process. And we agreed at the request of the locals there to do precisely that. So, as we do with anybody else who’s asking for a permit, we’re going to put it through the environmental review process. And we have to do it absolutely by the book. So that’s the process we’re in now. I will not prejudge it. And I am not going to get involved in it. I want it to be an objective scientific review. So that’s what we’re engaged in now. I have never taken a position for or against it.

Update: Look for the follow-up to this stirring exchange in my forthcoming Seattle Times column 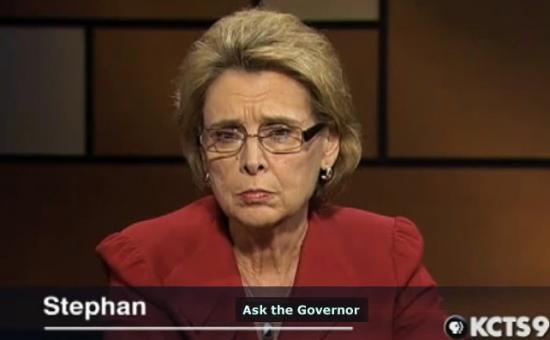