Tribute To Luna: Was He Already Home?

The tale of the endearing misfit orca known as Luna first came to my attention in 2004, three years after he had gone missing from the waters off Puget Sound and mysteriously reappeared in Nootka Sound on the west coast of Vancouver Island.

I was moved to read that he had adopted the townspeople of Gold River, B.C., as a kind of surrogate pod. Like many, I was taken by his uncanny desire to socialize. I also was concerned to learn that he had probably been injured playing around a motorboat and that some brazen, ignorant tourist had poured beer into his blowhole.

The obvious solution, it seemed, was to reunite Luna with his pod.

As I began researching Luna’s history, I could never have suspected that he would soon emerge from the warm, pristine waters of Nootka Sound and change my own life.

My first trip to Nootka was an eye opener. I hired a fishing charter in the hope of catching a glimpse of the mischievous orca. We hooked two 15-pound Chinook salmon within minutes of dropping our lines. Having met our quota, I was afforded a boat tour of Friendly Cove — where British explorer Captain James Cook dropped anchor in 1778 — and then out into the dark, choppy swells of open water at the mouth of the Sound.

Gazing south, down along the Vancouver Island’s dramatic, prehistoric looking coastline towards Victoria, I felt a sudden wave of sadness. “He’s never going make it all the way around and find his home again on his own,” I said aloud. Having his own affection for Luna, my guide offered, “Maybe he’s already home.” It jolted my entire premise.

I traveled from my home in Port Townsend, Washington, to Gold River many times, conducting interviews and taking photographs. In September 2005, I was invited to accompany two First Nation fisheries experts on a sea otter count up the northwest coast of the island aboard their lightweight Zodiac.

As we returned to the protected coves of Nootka Sound where the water is relatively calm, a call came in on the radio from the First Nation stewardship boat, the Wi-Hut-Suh-Nup. Luna was playing at the Gold River dock.

Minutes later, we were looking for Luna. At first there was no sign of him. We idled slowly from one end of the dock to the other. “False alarm,” I thought. Then I saw his forehead bobbing up next to the rusty hull of a large boat.

Fisheries coordinator Jamie James leaned over the side of the Zodiac and snapped his fingers underwater. Luna immediately swam over to our boat like a happy sea puppy. He seemed to recognize Jamie. He eyed me with mild curiosity. I was stunned.

For the next hour, Luna swam back and forth between our boats as we led him away from potential trouble at the dock and out toward the ocean. He gently pushed us from side to side. He dove with playful agility beneath the hull and pushed us along from the back of the zodiac. He did back flips and splashed the water with his tail and pectoral fins. He surfed in our wake and rubbed up against the side of the boat.

All I could say, over and over, was “He’s amazing!” I feel blessed to have encountered this very special creature. He struck me as a sweet, gentle, childlike spirit. 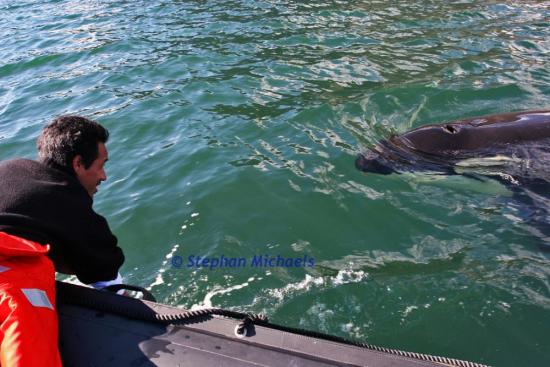 Much of Luna’s factual history is widely known, but the untold “story behind the story” that the mainstream media failed to even research can be found in the writings of Mike Parfit. A science writer and filmmaker, Parfit and his wife Suzanne Chisholm wound up living in Gold River almost full-time in order to document the playful, rambunctious toddler of a killer whale that Suzanne calls “the little goofball.”

When Canada’s Department of Fisheries and Oceans-funded stewardship permit expired, Parfit stepped in, assuming the role of an unauthorized “friend.” Mike would stay out on the water for days in his modest 20-foot fiberglass boat. He’d listen to Luna over a hydrophone, radio other vessels as to Luna’s whereabouts, and even lead Luna away from trouble when necessary.

Somehow Parfit found time to post his observations online at reuniteluna.com. These entrees provide poignant insights into Luna’s behavior and personality, his relationship with the community and his significance for the Mowachat/Muchalaht people.

Luna’s story touched many people around the world. (The supporter list on reuniteluna.com boasts more than 10,000 members alone.) Many are heartbroken as am I, and I know Mike and Suzanne must still be devastated. They gave Luna all they could and yet somehow feel they fell short, because Mike was not out on the water the fateful day that Luna was sucked into the powerful propeller of a 100-foot tugboat on March 10.

Personally, I can’t see how they could have done much more. Their sacrifice is an inspiring gesture of unconditional dedication and it underscores one of the most important lessons we can learn from Luna’s presence.

At a time when salmon runs are at historic lows, northern glaciers are melting at a rapidly accelerated rate and hurricanes and tsunamis are wiping out entire communities, Luna teaches us a powerful lesson about our role as stewards over this earth and its endangered creatures. While the opportunity to study and better protect Luna is now lost, this story of the wayward orca that touched us to the core cannot be forgotten.

I believe that Luna was failed by a slow political process that was unequipped to manage the enormity of the situation. But this is not the time for recriminations. Scientists, environmentalists and politicians will have time to assess what mistakes were made and they can glean insights from this iconic and charismatic killer whale as they ponder the next critical steps in protecting the remaining 87 endangered Southern Resident orcas of Puget Sound.

At the memorial ceremony in Gold River March 13, Mowachat/Muchalaht First Nations Chief Mike Maquinna was contemplative. “We’ve been honored by the presence of the whale. It’s easy to blame, but not today. People are trying to tell us it’s our fault. We as Mowachaht/Muchalaht have a lot to be proud of. We’ve stood by each and every animal in our territory since time immemorial.”

Tribal leaders believe that Luna embodied the reincarnated spirit of their chief, who died only days before Luna first appeared in Nootka. They had opposed the 2004 plan to capture him because they felt they had not been adequately consulted and that the attempt would be dangerous for Luna.

Upon first learning of the failed attempt to reunite the orca with his pod, I too thought the tribe should not have thwarted the effort. But once I looked into it, I discovered that the DFO action plan — to capture Luna and release him in Pedder Bay just west of Victoria in the peak of summer — was fraught with shortcomings. As DFO scientist John Ford told me, Luna’s failing to reunite “was a significant probability.” If Luna continued to be a problem with boats, he would have to be placed in an aquarium.

Some would argue that it would have been better for Luna to live in an aquarium than to die in such a terrible accident, but male orcas captured in the wild have not survived very long in captivity. After the ceremony, Jamie James asked me, “Is it better to die on your feet, or to live on your knees?”

It’s hardly black and white. It seems there are two sides to just about every aspect of this story. Still, I find some solace knowing that Luna lived free. Perhaps he was meant to live and die in Nootka.

Maybe he was already home. 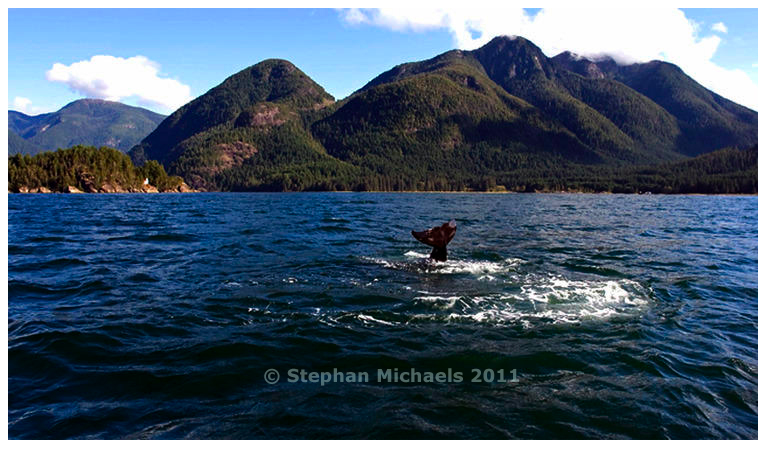