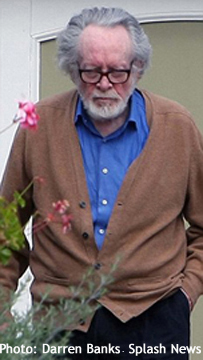 I suppose we all have our heroes, and I’ve been very fortunate to meet and speak at length with some of my own. Ian Anderson, Joni Mitchell, Frank Zappa, Ray Bradbury and Buckminster Fuller, to name a few. Original thinkers whose inestimable contributions have also left indelible imprints on the way I think about my path in life. And of all the creative people I’ve ever admired, no one has influenced me more than the independent minded and enigmatic actor, writer and director, Patrick McGoohan.

Long before I ever had the privilege of meeting Patrick, I had a kind of prophetic dream. I was sitting on a bench, on a grassy bluff overlooking a dramatic sea. The horizon was billowing with foreboding storm clouds; the wind was rushing up the cliff and over my face, huge white caps cresting out on the water. I suddenly became aware of an old man with a full grey beard sitting beside me. I looked up and realized it was Patrick. He turned to me and said, “I think it’s time we had that chat.”

A few years later, in 1990, I actually became acquainted with the man. At that time, I was working as a researcher at KCET-TV in Los Angeles where one of my colleagues was producing a documentary about ‘Big Brother In The Workplace.’ I suggested he might open the program with a clip from McGoohan’s television series The Prisoner, where the character Number Six is under surveillance, to illustrate how an iconic work of fiction had actually foretold a modern day reality.

So I called Patrick’s wife, Joan, a local real estate agent, and asked how best to approach the man for his permission. She was very kind and gave me the phone number at his home office, saying, “If he’s in a good mood, he just might do it.”

Well, Patrick was in good mood and of an open mind. He said, “Send me something in writing and I’ll respond.” I guess he liked the letter I wrote, in which I drew a vague analogy between some of the themes in The Prisoner and Marxism. I was elated when he called me at work and suggested we meet. How ‘bout that? A childhood hero turned professional acquaintance!

I will never forget sitting across from him at an Italian restaurant on the Promenade in Santa Monica, California. I was smoking a pipe in those days and when I produced it from my jacket pocket, McGoohan admonished, “You’d better put that thing away, or they’ll call the fire brigade.” We talked about politics, writing, directing, and my own career. He even talked a little about The Prisoner and the sequel he was writing, The Oasis. We spoke for nearly three hours and he asked a lot of questions. I felt like I was being interviewed, if not interrogated, and I ended up smoking half a dozen of his cigarettes.

As we walked back to our cars, Patrick asked if I thought I’d ever have any real money, and – as I had already confessed to being a bachelor – if I thought I’d ever get married. I answered optimistically to the first and shrugged off the latter. The valet pulled up in his silver BMW and Patrick offered that he and his wife had been married for forty years. “And do you know why it works? Because we don’t agree on a thing!” What a strange, endearing thing to say, I thought.

We seemed to have developed a genuine rapport and spoke several times over the next few months. Still, I’ve never felt comfortable using the word “friendship” to describe the relationship. I just didn’t know the man that well. Indeed, a few months later, he abruptly dropped off the radar without a word. I didn’t hear from Patrick for almost a year.

On November 7, 1991, the very day that Frank Zappa formally announced he had prostate cancer and Magic Johnson declared he was retiring from basketball because he was HIV positive, Patrick McGoohan surprised me with a late afternoon phone call. “Yeh, Stephan, it’s me, Patrick.” He apologized for the “long radio silence,” and then revealed he had been having some problems “in the old health department.”

I worried about his well being a lot over the ensuing years, but never inquired about particulars. I felt that would be a kind of invasion, so I simply let Patrick tell me what he wanted. Which wasn’t much. I’d just call to say hullo and see how he was feeling, and he’d tersely reply, “medium rare.”

I was delighted to see him out and about and quite well, when we ran into each other again on the Promenade. It’s a funny memory.

It had been several years since we first met. I had moved a few rungs up the ladder of my career and had also taken up competitive mountain biking. Well heeled, clean-shaven and in exceptional condition, I walked into the Broadway Bar & Grill to meet a girlfriend for lunch. She was running late, so I sat down to wait for her at the deep red wooden bar, which had columns every few seats that extended up to the ceiling. I sat on one side of a column, and on the other sat an older fellow sporting a weathered, Stingy brimmed straw hat, large, rose tinted sunglasses and a thick grayish-white beard. I dismissed him as kind of odd looking.

My date arrived and as we greeted each other, the oddly-chapeaued guy on the other side of the column looked up and craned his neck around, trying to see who was speaking. I caught the face reflected in the mirror behind the bar and realized, “Good lord, it’s Patrick!”

As we headed to our table, I turned to the man at the bar.

He looked up and quipped, “I’m tryin’ to remember.”

The surprised look on his face was priceless. “Oh, my god!” he exclaimed as he looked me up and down. “You’re a changed man!” His eyes stopped at my $200 Italian dress shoes. “In many ways,” he added.

I think just about everybody in the place heard us all bellow.

We talked briefly and I admitted not having recognized him at first. “It’s my disguise,” he laughed. I then told Patrick about a new project I was developing, called Divisadero Street. It was an idea for a dramatic series featuring two law school students, young lovers who never agreed on anything, but who secretly worked together with a local priest to expose corruption. Patrick seemed suitably impressed, saying it sounded “original.” I asked if he’d like to see it. He replied, of course, “Send it to me and I’ll respond.”

When I called a couple of weeks later, to see what he thought of the treatment I had sent over, Patrick was incredulous.

“This is a proposal!” he protested.

“Where’s the script?” he demanded.

“Patrick, I’m a producer, not a screenwriter.”

He rejected that, saying I was arguing for my own limitations. “If you don’t write it,” he prompted, “who will?”

In December of 2004, as I was leaving Los Angeles for the Pacific Northwest, Patrick’s was one of the last calls I received before the phone was disconnected. Funny, Joan McGoohan and I had talked just a couple of days prior and I imagined he had called at her behest. Truth be told, I have proclaimed more than once, “those of us who care about Patrick, love Joan McGoohan.” To me, she epitomizes grace, patience and generosity. I think Joan is actually some kind of saint.

“So, you’re packing it up?” he said. “You’re heading in the right direction!” I’d never heard him sound so upbeat and encouraging. The lilt in his voice was cheerful and affectionate. We were on the phone for almost half an hour.

Ultimately, I think I wore the poor guy down — with reverent persistence and unflagging affection — into adopting the role of an elder friend and mentor. I feel honored. Still, I regret that I never got past that feeling of reverence. Otherwise, we might have become real friends.

Well, I guess you never know just how much you care about someone until they’re gone. I cried upon hearing that Patrick had passed away. We had talked just a few months before, shortly after his 80th birthday. I still feel empty and lonely and I lament that I will never get to hear that lyrical voice again.

Yet, as I celebrate the man’s great spirit, I can still hear his voice from memory. The wonderful inflection, the probing honesty, asking me, “If you don’t write it, whooo willl?” His words still resonate: I am now digging through my notes and finally writing the pilot for Divisadero Street.

Maybe I tend to idealize a bit, but Patrick McGoohan remains my number one hero, and he will always be an inspiration for me to try and do meaningful, important things with my life.

I took this photograph at Friendly Cove, at the mouth of Nootka Sound on the Northwest coast of Vancouver Island. The area is considered the birthplace of British Columbia, where Captain Cook set anchor in 1778 for repairs. As I surveyed a tranquil yet strangely familiar scene, I thought, “this would be a good place to go, when I die.” I like to think that we do go somewhere after this life, and that if I’m lucky, Patrick might come walking up the path one day… and we can have that chat. 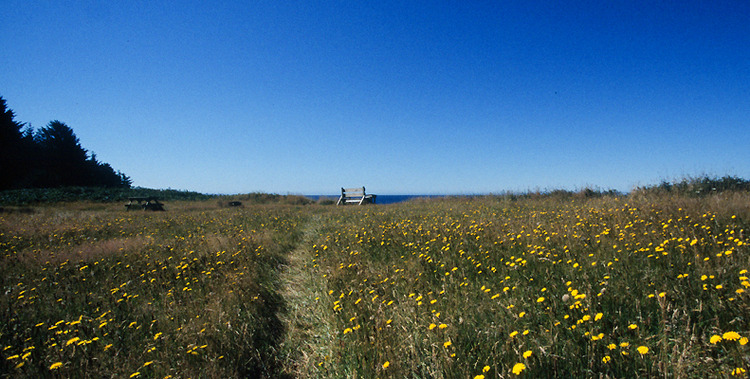