Upon Surviving The Hospital

When unexpectedly availing oneself of the services and amenities accorded by the nearby hospital emergency room, the following etiquettes — albeit eccentric — might well come in handy.

Backgrounder:  I am relieved to report that a Sunday evening emergency appendectomy went about as well as could be hoped, considering the abrupt and obstinate tantrum the bugger threw.  A great surgeon and capable staff saved me from a painfully ticking time bomb.

The recovery room nurses were equally attentive and personable as I swam out from the haze of general anesthesia.  My voice was deep and gravely.  Stuporous and punchy, I found myself singing, "In the morning gonna get my things together, I'll pack it up and leave this place. I don't believe your crying they'll be – a smile upon yer face." I am told I have the notoriety of being the first person to ever sing to the nurses upon regaining consciousness.  And throughout the wee hours they would come check on me, marvel at my vitals, bring me sherbet and tea and brush away my fears.

Ah, but they were gone with the morning sun.  I was slumbering peacefully when the day shift-show arrived. And this is where "The Unexpurgated Code" comes into play.  As JP Donleavy explains in "A Complete Manual of Survival and Manners," one need be proactive about their care. "To keep hospital employees on their toes and their hands on the right remedy, you must alternate between being highly irritated or generously polite. A little of each following plenty of the former is the recipe."

I remembered his theory as soon as I realized I'd been parked inconveniently near the staff coffee room.  Afforded the privilege of every tidbit of gossip and guffaws the nurses and doctors could muster at an early hour, I managed to volley a pained, "Hey, pipe the fuck down out there!" toward my door.  Silence.  With a whiff of satisfaction, I quickly fell back to sleep, for maybe 10 minutes.  Now a new voice had joined the chorus, a haughty male tenor with authority and pomp. Raising my head in anger, I knew shouting at the door again would do me no honor, and could reach neither of my shoes to hurl. I called the nurses station.  "I'm terribly sorry to bother," I softly began, "but would it be at all possible to get the medical convention gathered outside my door to please show a just modicum of consideration…. and pipe the fuck down out there!?" Silence within minutes.

Enter Helga.  Yes, that really was her name. Where compassionate night nurses Anne and Renee expressed sheer admiration at my level of well being and how I handled the emergency with calm and conviviality, Helga expressed no such amusement. Entering with a faint knock as I was exiting the bathroom and pushing the IV pole ahead of me, she exclaimed, "Spencer, you're not supposed to be up!" "Yes, well your colleagues saw to that."  And as I climbed back onto my gurney-like bed, an exposed butt cheek or two popping through the rear of the gown, I turned to ask ,"Who the fuck is Spencer?" "Please sir, this is Catholic hospital!"  She pointed to the crucifix above the bathroom door. "Oh, him again," I muttered. Helga looked at her chart and then addressed me by my last name.  "Michael, I am sorry I got your name wrong."  Things slid downhill from there.

But having now demonstrated Donleavy's irritation in spades, I tried to employ an ounce of generosity.  "Please forgive my being edgy, it's the medicine talking. I'm not always so foul mouthed."  "Oh, that's okay," she said. But I insisted on contrition and continued, "no, that was really fucked up of me and I'm sorry."

She didn't even react, but produced one of those small pleated paper cups with three pills.  Two brown and one red. "What's the red one?"  I asked.  "It's a stool softener"  I smiled, "I don't need that."  She looked down grimly and said, "Oh but you will; you will."  I paused.  I know pain pills can have that affect, but her not knowing my name and her deference to a stick figure above the doorway made me leary.

"Look, I'm really paranoid of being poisoned, would you mind trying them first?"  At this she laughed.  I took my pills, tucking the red one under my tongue as she turned to the dry board on the wall.  Popping out the ruby, I slid it under my pillow as she began to read every god damn word on the board, out loud.  I told her to stop.  "Been reading it all morning. Got it memorized."  She said she would see if the doctor was ready to see me.  "Please! I need to get the hell out of here. I have a dog to feed!"

The room now Helga-free, I had a few comments of my own. Gingerly off my bed and pushing the IV cart as before, I added some notes….

My poor and admittedly embellished homage to the late great J.P. Donleavy aside — it was the medication writing — a very gifted surgeon and her support staff probably saved my life.

And for that I am very, very grateful. 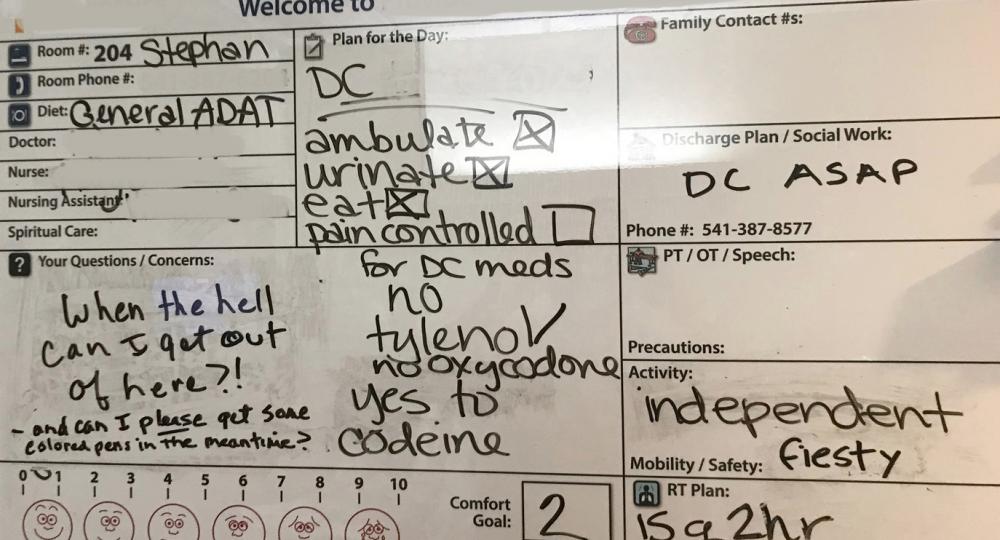